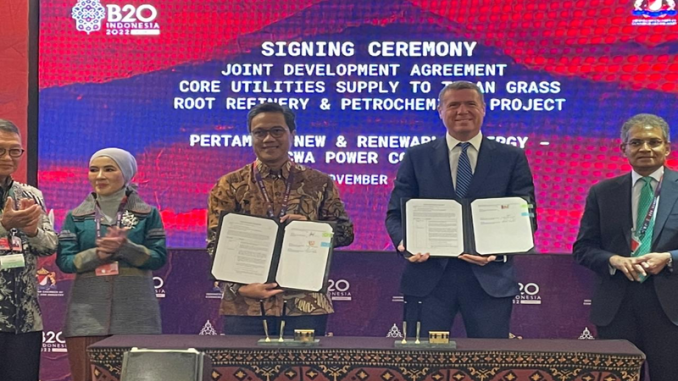 The agreement was signed by Dannif Danusaputro, CEO of PNRE and Paddy Padmanathan, Vice Chairman and Chief Executive Officer of ACWA Power, at the B20 Summit. The ceremony was witnessed by Indonesian Minister of Energy and Mineral Resources Arifin Tasrif, Indonesian Chairman of Chamber of Commerce and Industry Arsjad Rasjid, Chair of B20 Indonesia Shinta Kamdani, and CEO & President Director of Pertamina Nicke Widyawati.

A refinery capable of producing aromatics and ethylene, the Tuban facility is located in Java, eastern Indonesia. The scope of the JDA comprises development of a 575 MW power generation facility, a steam generation component with a capacity of 3,288 tonnes per hour; and a water desalination plant with a total capacity of 363,480 m3/day.

Developing low-carbon solutions is PERTAMINA NRE’s core business focus, along with renewable energy development, and building future businesses. As a subsidiary of the state owned PERTAMINA group which has committed to a net zero emissions target by 2060, PERTAMINA NRE is at the front of building green businesses and developing decarbonisation initiatives in the Republic of Indonesia.

The Tuban GRR&P has been identified by the Indonesian government as a project of national strategic importance that will enable national energy security and advance the domestic petrochemical industry.

ACWA Power’s power and water desalination plant for the Tuban GRR&P is expected to be operational by Q1 2027.