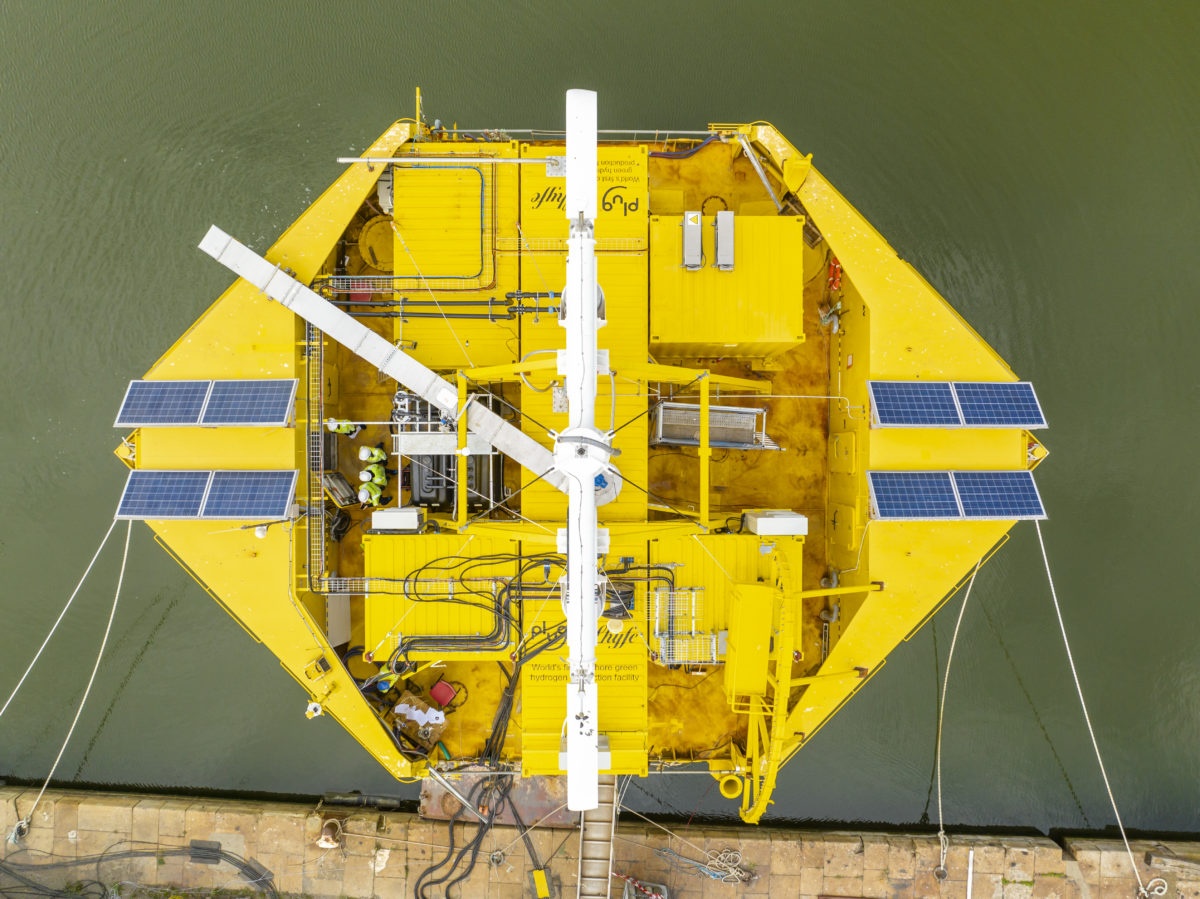 Lhyfe has launched the world's first offshore renewable green hydrogen production demonstrator. “Sealhyfe has the capacity to produce up to 400 kg of renewable green hydrogen a day, equivalent to 1MW of power,” said the France-based hydrogen producer. The 18-month wind-powered pilot in Saint-Nazaire, France, will operate near the shore for the first six months, before it is moved to a site 20 kilometers off the coast of Le Croisic. The project will be installed less than 1 km from the floating wind turbine. It will use wind power to pump, desalinate and purify seawater. The platform, developed by Geps Techno, will operate automatically. Plug Power supplied the electrolyzer. “By 2030-35, offshore could represent an additional installed capacity of around 3 GW for Lhyfe.” The company collaborated on the project with Chantiers de L'Atlantique, the Port of Saint-Nazaire, Kraken Subsea Solutions, Pays de la Loire Region, and French energy and environment agency ADEME.

SSAB, LKAB, and Vattenfall have commissioned the HYBRIT pilot facility, which will store fossil-free hydrogen gas in Luleå, Sweden. “The rock cavern storage facility is the first of its kind in the world for storing fossil-free hydrogen gas,” wrote Vattenfall. After initial pressure tests with water in June, the 100-cubic-meter storage facility was filled with hydrogen gas and reached a maximum operating pressure of 250 bar. The two-year test period will continue with test campaigns to collect data until 2024. “HYBRIT technology will be used for the production of fossil-free sponge iron on a large scale at a first demonstration facility in Gällivare,” said Lars Ydreskog, director of strategic projects at LKAB.

École polytechnique fédérale de Lausanne (EPFL) researchers have developed a bulk heterojunction photocathode that can reduce water to hydrogen in a pH 9 electrolyte by organic semiconductor selection and replace the conventional metal oxide hole transporting layer with an organic self-assembled monolayer charge selective layer. “The optimized photocathode produces a photocurrent density of >4 mA cm−2at 0 V vs the reversible hydrogen electrode (VRHE) for solar water reduction with noticeable operational stability (retaining ≈90% of the initial performance over 6 h) at pH 9,” the researchers wrote in “An Organic Semiconductor Photoelectrochemical Tandem Cell for Solar Water Splitting,” which was recently published in Advanced Energy Materials. Combining the optimized BHJ photocathode with a benchmark BHJ photoanode leads to the demonstration of a large-area (2.4 cm2) organic photoelectrochemical tandem cell for complete solar water splitting, with a predicted solar-to-hydrogen (STH) conversion efficiency of 0.8%, said the researchers.

The International Energy Agency (IEA) says that the energy crisis has expanded interest in hydrogen, but wider policy support is needed to drive new uses in heavy industry and long-distance transport. “The encouraging developments in hydrogen technologies that can support the clean energy transition include an expected sixfold increase by 2025 in global manufacturing capacity of electrolysers, which are needed to produce low-emissions hydrogen from renewable electricity,” wrote the IEA in its yearly “Global Hydrogen Review.” Global capacity to manufacture electrolyzers now stands at 8 GW per year, but based on industry announcements, it could exceed 60 GW a year by 2030. “If electrolyzer projects in the pipeline are completed and the planned scaling up in manufacturing capacities takes place, costs could fall by around 70% by 2030 compared with today,” said the IEA. If all projects now in the pipeline come to fruition, the production of low-emission hydrogen could reach 16 million to 24 million tons per year by 2030, with more than half of it coming from electrolyzers running on renewable energy, it said.

Rethink Technology Research says that hydrogen transportation costs could be more important than production costs in defining the amount of hydrogen consumed globally. “Importing hydrogen to resource-rich countries will add between $0.50 and $1.86 per kilogram, depending on the distance and the means through which it can be transported. With distribution accounting for nearly two-thirds of the final cost of hydrogen to the customer, these delivery mechanisms will dictate competition throughout the hydrogen market,” the consulting company wrote. Its report suggests that pipelines and liquid organic hydrogen carriers (LOHC) will dominate the future of hydrogen trade.

The US Department of Energy (DoE) has opened applications for a $7 billion program to create regional clean hydrogen hubs (H2Hubs) across the United States. The project is part of the $8 billion hydrogen hub program funded through President Joe Biden's Bipartisan Infrastructure Law. The DoE aims to select six to 10 hubs. Concept papers are due by Nov. 7, 2022, and full applications are due by April 7, 2023.

The European Commission has approved a second Important Project of Common European Interest to support research, industrial deployment, and construction of relevant infrastructure in the hydrogen value chain. Austria, Belgium, Denmark, Finland, France, Greece, Italy, the Netherlands, Poland, Portugal, Slovakia, Spain, and Sweden are participating in the project, and will benefit from up to €5.2 billion in public support. “We will also increase our financial participation in Important Projects of Common European Interest,” said Commission President Ursula von der Leyen.