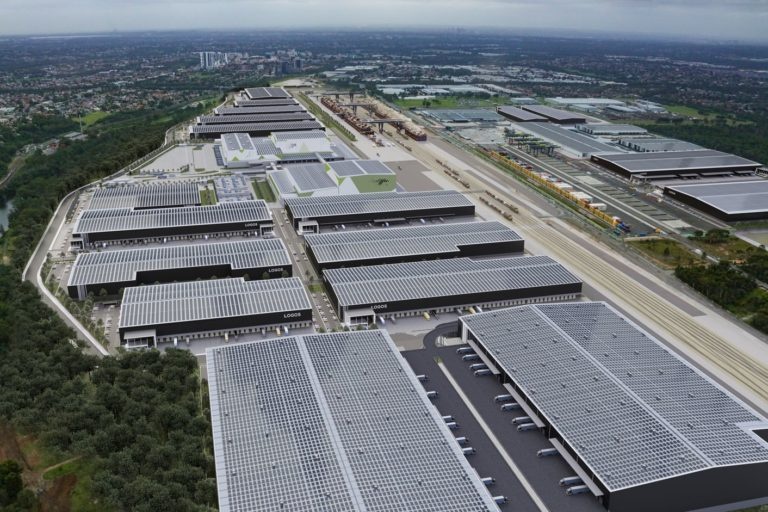 Solar Bay has signed a 30-year agreement with Logos to install and operate 60 MW of rooftop solar PV and 150 MWh of battery energy storage to provide network and retail energy services to tenants of the Moorebank Logistics Park (MLP) near Port Botany in the New South Wales capital.

Logos, which was part of a consortium that purchased the facility in 2021 in an AUD1.67 billion ($1.11 billion) deal, will fund the construction of the 60 MW rooftop solar PV array and 150 MWh battery energy storage system with Sydney-based Solar Bay delivering the ongoing operation of the embedded network.

“This maximizes outcomes for all involved – from Solar Bay as the operator, to Logos as the investment and development manager, to our tenants, with the economies of scale at MLP offering a distinct, market-leading advantage with the amount of renewable energy provided through a microgrid,” Logos Australia and New Zealand head Darren Searle said.

Once fully operational the precinct-wide microgrid, which will operate at a combination of 11 kV and 33 kV, will be capable of supplying 100% of MLP’s energy requirements during daylight hours and will source electricity from an off-site wind farm to supply renewable electricity outside peak solar generation periods.

Solar Bay investment director James Doyle said the rooftop solar and battery storage system will connect into the high voltage network at multiple points, with complementary technology such as megawatt-scale electric vehicle/truck fast chargers also able to be integrated throughout the precinct.

“MLP is a prime example of the convergence between property and energy infrastructure that we’re seeing across Australia and New Zealand,” Searle said. “A precinct-wide microgrid facilitates the on-site installation of utility scale solar and batteries, providing tenants with the ability to access a vast amount of renewable electricity that matches the scale of their electrified operations.”

The combined capacity of the rooftop solar and battery energy will generate enough clean energy to power the equivalent of 40,000 homes, avoiding an estimated 67.2 kilotonnes of carbon emissions each year.

The companies said the impact of the MLP solar and battery microgrid will extend far beyond the site itself and will “play a key role in the state, regional and local economies given its size, scale and influence”.

“With a number of the significant loads at MLP able to be flexed in real time, the site will also interact with the National Energy Market (NEM),” the companies said in a statement. “This will … optimize the consumption of on-site generation and provide services back to the NEM when required, via demand response and the ancillary market.”

While already massive, the rooftop solar system is expected to grow even further. With more than 800,000sqm of roof space at the precinct, the 243-hectare site has the capacity to accommodate up to 130 MW of rooftop solar, capable of generating 183 GWh of electricity per annum.

Doyle said future stages of the microgrid could be used to meet changing needs of tenants, including thermal storage, hydrogen generation and supply, and related low-emission infrastructure.

“With over 800,000sqm of rooftop solar possible we can also assist in the decarbonization of transport and utilize surplus generation to produce low emission fuels such as hydrogen,” he said.