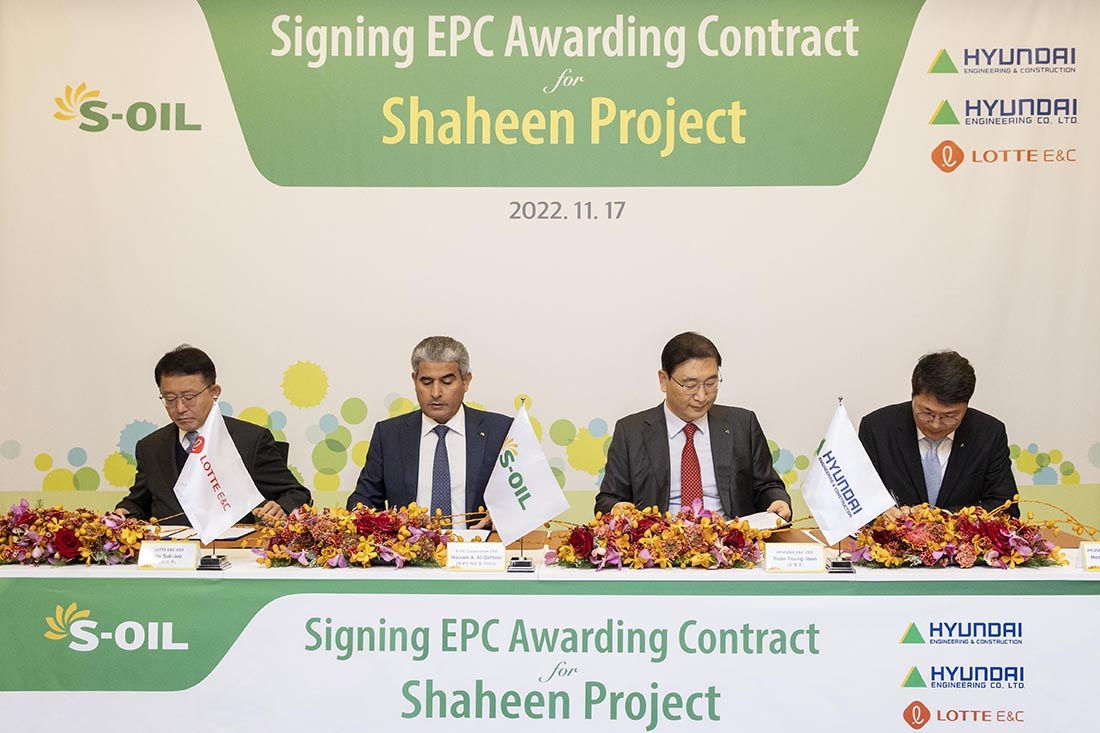 Hyundai E&C and Hyundai Engineering will participate in the Shaheen Project, the largest Korean petrochemical project ever.

Hyundai E&C and Hyundai Engineering decided to carry out the largest-ever petrochemical facility construction (Package 1 and Package 2) ordered by S-Oil on Thursday and held a contract signing ceremony on the 17th(Thursday).

The project will be carried out by a consortium including Hyundai Engineering and Lotte E&C with Hyundai E&C as lead manager, and the construction will begin early next year and scheduled for completion in 2026.

In particular, the project will be the first to introduce the TC2C(Thermal Crude to Chemical) technology developed and commercialized for the first time by Saudi state-run company Aramco, S-Oil's largest shareholder. The technology helps to convert crude oil into petrochemical substances and maximizes the production yield of naphtha, a petrochemical raw material. When completed, the facility will produce annually 1.8 million tons of ethylene and 750,000 tons of propylene, and S-Oil plans to increase the production share of petrochemical products from 12% to 25%.

The Hyundai consortium's participation in the Shaheen project has been evaluated to be recognized for its optimized engineering, procurement, and construction(EPC) capabilities in the petrochemical and gas plant sector. Hyundai E&C was the first Korean general construction company to obtain international standard certification for the quality management system ‘ISO·TS 29001’ in the oil and natural gas sector in 2019 and has built a long-standing trust by successfully carrying out a number of oil and gas plant projects ordered by Saudi Aramco. Based on such track record, Hyundai E&C was finally selected as a partner(EPC construction) company for mid-to long-term growth projects promoted by Aramco in July and secured exclusive status from the latter, including private contract awards and bidding incentives for a number of upcoming new projects.

Hyundai Engineering is also successfully carrying out a project as a lead manager by winning the 2 trillion won Jafurah  petrochemical facility project ordered by Aramco last year, along with Hyundai E&C. In addition, it was the only Korean builder to stand out in the European petrochemical plant market by winning an EPC project worth 1 billion euros in 2019, ‘Poland Polimery Police PDH/PP Project’, and last year won ‘Poland PKN Olefin Expansion Construction Project’, and ‘Indonesia’s LINE Project’. Based on technology competitiveness and extensive track record in the field of basic design (FEED), Hyundai E&C is expanding its portfolio into 'FEED-EPC(engineering, procurement, and construction)’ projects.

Meanwhile, Saudi Aramco, the world's largest energy company, is expected to order about 10 projects similar to the Shaheen project while Hyundai E&C is expected to accelerate its overseas expansion, beginning with Saudi Arabia.

A Hyundai consortium official said, "This project, the largest in the nation's petrochemical industry, is a valuable achievement built on the technology, business capabilities and long-term trust between the two companies that have successfully carried out petrochemical plant projects at home and abroad, and thus is a priceless achievement driven by the long-standing trust with the ordering company,” adding that, “Hyundai E&C plans to establish a solid position in the Middle East by stably securing large petrochemical orders planned for bidding in the mid- to long-term in Saudi Arabia, and it will serve as a launch pad to expand the company’s portfolio of overseas orders.”